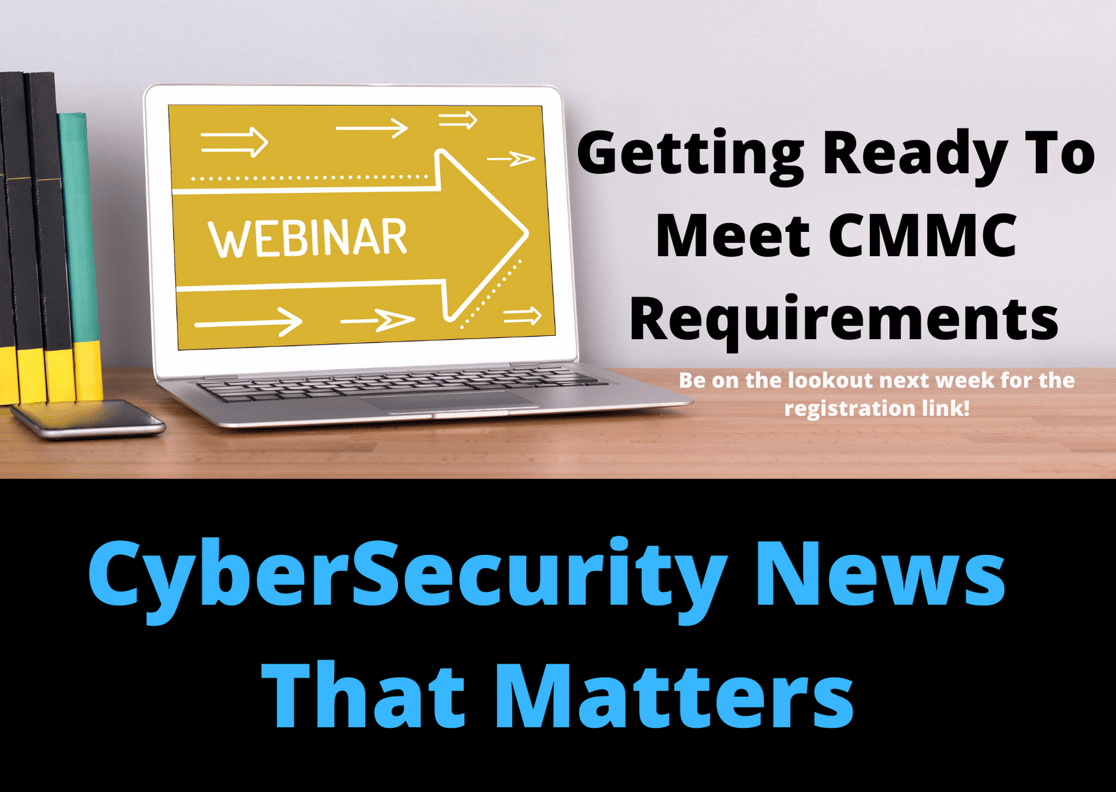 Top Story for this Week

What Exactly is CUI? (and How to Manage It)

CUI, or controlled unclassified information, didn’t have much of an established identity before 2010. It went by any number of aliases and took a back seat to the more glamorous classified category. However, should CUI fall into the wrong hands, something as serious as national security could be at risk. This article will explore CUI—what it is, why it’s so important, how CUI management is changing, and the single most important action your company can take to properly manage CUI today.

New Known Breaches in the Past Week

Flight Center has confirmed that a significant data breach that occurred in 2017 was the result of sensitive information being left in a database given to hackathon participants. The compromised data included credit card numbers and passport details. By Barclay Ballard I December 07, 2020

The Greater Baltimore Medical Center in Towson, Maryland was hit by a ransomware attack that impacted computer systems and medical procedures, the healthcare provider said Sunday. By Mike Lennon I December 07, 2020

Delaware County, Pennsylvania has paid a $500,000 ransom after their systems were hit by the DoppelPaymer ransomware last weekend. By Lawrence Abrams I November 29, 2020

Before Clay Heuckendorf and members of his team could even hazard a guess as to why some of a client’s backup data was missing, bad actors launched a ransomware attack right before their eyes. By Teri Robinson I December 07, 2020

FireEye was recently breached in what’s believed to be a state-sponsored attack designed to gain information on certain of the threat intelligence vendor’s government customers. By Michael Novinson I December 08, 2020

Cloud hosting and IT services provider Netgain was forced to take some of their data centers offline after suffering a ransomware attack in late November. By Lawrence Abrams I December 8, 2020

Although it is logical that cyberattacks have risen during the pandemic—and there is anecdotal evidence that it is occurring, including our own experience—an interesting new report on the number and effect of the cyberattacks was recently released by Allianz, which provides cyber liability insurance products. By Linn Foster Freedman I December 8, 2020

California has made history once again. In early November, California voters approved a ballot initiative known as Proposition 24, which enacted the California Privacy Rights Act (CPRA). In an attempt to further increase the protection of consumer data, the Golden State has gone beyond any other state to create an omnibus privacy regulation. By Sweeney Williams | December 8, 2020

This year has shown many of us that virtually we can achieve many things, but with us utilizing the internet more, cybercriminals can gain easier access to our data. By Nordea Lewis I December 9, 2020

How Managed IT Services Benefit the Manufacturing Industry

Nowadays, all types of businesses require IT support to improve the efficiency of their operations. The manufacturing firms also rely on managed IT services to reap the maximum benefits of information technology. The IT support professionals take the IT burden of manufacturing units and enable them to focus on their core business aspects. Also, they take care of the hardware and software assets of the enterprises. By Roger Trevino I December 6, 2020

Chrome, Edge and Firefox May Leak Information on Installed Apps

Two information disclosure vulnerabilities recently identified in the Chrome, Edge, and Firefox web browsers may be exploited to obtain information on applications on the system, Fortinet reports. By Ionut Arghire I December 07, 2020

A new form of cyberattack has been developed which highlights the potential future ramifications of digital assaults against the biological research sector. By Charlie Osborne | November 30, 2020

The Kubernetes Product Security Committee has provided advice on how to temporarily block attackers from exploiting a vulnerability that could enable them to intercept traffic from other pods in multi-tenant Kubernetes clusters in man-in-the-middle (MiTM) attacks. By Sergiu Gatlan I December 8, 2020

Adobe Systems has stomped out critical-severity flaws across its Adobe Prelude, Adobe Experience Manager and Adobe Lightroom applications. If exploited, the serious vulnerabilities could lead to arbitrary code execution. By Lindsey O'Donnell I December 8, 2020

Congress prepares to move on NDAA, which is loaded with cyber provisions

This year’s annual defense policy bill, known as the National Defense Authorization Act (NDAA), is loaded with provisions that would reshape the federal bureaucracy on cybersecurity. It would create a national cyber director in the White House and strengthen the Department of Homeland Security’s Cybersecurity and Information Security Agency (CISA), among other changes. By Tim Starks I December 7, 2020

The IoT Cybersecurity Improvement Act of 2020 requires the National Institute of Standards and Technology (NIST) to develop and publish standards and guidelines on addressing issues related to the development, management, configuring, and patching of IoT devices. By Ionut Arghire I December 08, 2020